Sponsored by SAGA Construction & Development and hosted by Outer Banks Sporting Events (OBSE), the Outer Banks Triathlon is both fun and challenging. The event takes place in mid-September, a time often referred to as the most beautiful time of year on the Outer Banks. Kicking off in Downtown Manteo that usually sells out.

SAGA Community Focus donated a podium to OBSE to conduct award ceremonies and create a vantage point for photos.

Why SCF got involved with OBX Tri

SAGA Community Focus was inspired by the positive influence that this OBSE event had on the local off-season economy. SCF also believes in supporting healthy living as well as athletes and their endeavors.

“SAGA is proud to be able to help in this opportunity for economic impact for our community during the shoulder season. This event also brings in revenue that goes directly to the Dare Education Foundation in support of local public education and the Outer Banks Relief Foundation for support of local citizens in need,” Amit Gupta, President of SAGA Construction, stated.

The Tri started with a swim at the “Old Swimming Hole” next to the Dare County Airport. Participants enjoyed panoramic views of the Croatan Sound, the Virginia Dare Memorial Bridge and the Manns Harbor Bridge. 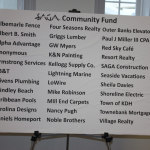 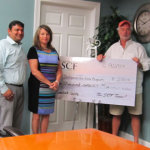 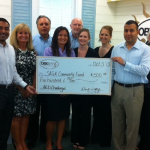