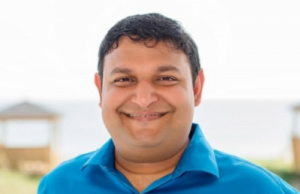 Over the past seven years, by his demonstrated leadership, Amit has encouraged others to volunteer in non-profit organizations and he has been the point person for activating the SAGA employees to ”join in” a volunteer effort in order to assist in a positive outcome. For example, Amit used social media and web to help coordinate volunteer efforts for the 2013 Triathlon. He also helped increase volunteerism, while team-building, by challenging the employees to compete in the putt-putt for polio challenge (proceeds were for Rotary International and their cause to eradicate polio).  He has been a board member of the Dare County Arts Council.

Amit, has been involved with his local church since his teenage years. He helped to coordinate a youth group at his church, and was instrumental in helping to raise funds by setting up Mother’s Day Walk-A-Thon in the local community park. He was also a volunteer that helped setup and breakdown after events. While in High School, Amit helped to put on (telecast) large scale sporting events to help raise funds for the church. Later as an young adult in college, Amit used his IT skills to setup the church’s IT network and server to help the priests and other volunteers better manage scheduling and accountability for money. One value that he has learned from his father is to donate a part of his monthly salary for a good cause. As a result of that, Amit has been donating a fixed amount from his salary every month to his church for more than 10 years now.
Further, he believes in business’s ability to play an important charitable role within the community and has been key in undertaking various “Challenges” that demonstrate this approach. He feels that business leaders share a responsibility in strengthening the community by supporting those in need and this belief is the one of the primary reasons for SCF’s existence.  For example, Amit, was an integral part in creating a 21 Day Challenge to bring about awareness and collect food for the local food banks by utilizing social media and print media to attract businesses to join in the efforts.  A goal of 100 bags of groceries was set, and over 160 bags were raised directly plus others gave directly to the food banks. Amit was also instrumental in arranging events like “Breakfast for AED” and “Sky Diving Challenge” to encourage local businesses to donate for the AED cause. The AEDs (Automated External Defibrillators) were placed in local patrol cars.
He looks forward to his continued role at SCF, and identifying additional programs that will better assist the people and communities of the Outer and Inner Banks of North Carolina.